Legionnaires’ disease is on the rise. Found in potable and non-potable water systems, the Legionella pneumophila bacterium is natural to fresh water environments like lakes and streams. However, when introduced to drinking water systems, air conditioning systems and even hot tubs and decorative fountains, it can multiply very quickly creating potential problems for property owners across the country.

While not a problem to drink, the bacterium can cause lung disease and severe pneumonia when small droplets are inhaled or aspirated. It’s especially dangerous to those with weak immune systems or over the age of 50.

Raising awareness about legionnaires’ disease is important to NV5, in part because of past personal experiences by members of the NV5 team. Don Bradley, spouse of NV5’s Marketing Manager Christine McCarthy had Legionnaires’ disease a number of years ago. Initially misdiagnosed, Bradley spent over 30 days in the hospital with pneumonia and a fever that spiked to 107 degrees at times. He ultimately missed six months of work recovering. The disease was likely caused by ongoing renovation of an HVAC system in a building where he ate lunch.

Keeping Legionella out of water systems is key to preventing outbreaks, particularly in places such as senior living facilities and hospitals. Building owners with cooling towers (air conditioning units) or large plumbing systems should take proactive steps to manage and possibly treat Legionella bacteria. The testing and treatment process is inexpensive and quick—especially when compared to the human health risk paired with building owner’s emotional, mental and legal anxieties that could arise if there is an outbreak.

Growing Concerns
Since 2000, the reported cases of Legionnaires’ disease have grown by nearly four and a half times, according to the Center for Disease Control and Prevention (CDC). The Legionella Organization states that an estimated 10,000 to 18,000 people are infected with the Legionella bacterium in the United States every year.1 In 2017, health departments documented high profile outbreaks in Anaheim, California, Las Vegas, Nevada, Round Rock, Texas and in the Manhattan Borough of New York City. The disease can be and often is fatal. The CDC estimates that one out of every 10 people who get sick from the waterborne pathogen will die. 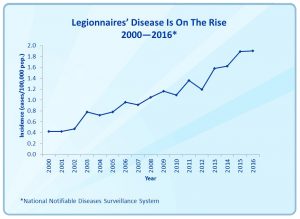 It is unclear whether the rise in cases over the last 15 years is due to increased Legionella bacteria in the environment, greater susceptibility of the population, more testing for the disease (in years past, infections have been misdiagnosed or not reported) or a combination of all of these factors. However, we certainly know the source and cause of the disease.

From One Droplet
The primary illness associated with Legionella exposure was named Legionnaires’ disease after an outbreak of the disease happened at the 1976 American Legion convention, after which more than 130 attendees were hospitalized and 29 died.

Unfortunately, the symptoms are commonly misdiagnosed as the flu, and until recently, many physicians did not test for it. If not treated at the source, Legionella bacteria grow and multiply in building water systems where temperatures range from 68-122 degrees Fahrenheit. Other factors that can spark growth include lack of disinfection, water stagnation, buildup of slime or scale and poor maintenance.

In the last year, we’ve seen a considerable rise in Legionella presence, particularly in senior living facilities, which combine potential sources for the bacteria to get into the lungs of individuals with compromised immune capacity. In one recent case, nearly every tested shower head at a facility came up positive for the bacterium—a case that is particularly troubling because cleaning shower heads may not be a singular priority for facility managers.

In a survey of multiple office buildings spread over the Midwest, we found significant levels of the bacterium in several cooling towers, particularly propagating in areas that had been or were scheduled to be temporarily put out-of-service during the heating season. Stagnation and deferred maintenance over periods of decreased use can be particularly troublesome if towers aren’t serviced immediately prior to being put back online.

Additionally, we’ve seen a significant increase in requests for litigation assistance (expert witness) regarding diagnosis of the disease in hot tubs, spas and pools in health clubs and community clubhouses.

Treatment & Prevention
Testing for the Legionella bacterium is straightforward—fill up a treated container, keep warm and send it to an accredited microbiology lab.

Treatment and prevention is also uncomplicated. Large water systems (e.g., drinking water systems, hot tubs, decorative fountains, water heaters and cooling towers) in which Legionella can grow should be disinfected regularly, or kept at temperatures unsuitable to propagation. As well, proper routine maintenance of cooling towers and plumbing systems is imperative to keep Legionella contained. Water should be checked for disinfection during all routine maintenance activities and every three months. Manufacturers of all equipment have published easily followed recommendations for such purposes. Additional information can also be found at websites such as CDC.gov or ASHRAE.org.

Here are a few other common areas of Legionella growth and prevention steps:

A good reference for water system maintenance is the American Society of Heating, Refrigerating and Air- Conditioning Engineers’ (ASHRAE) Guideline 12-2000: Minimizing the Risk of Legionellosis Associated with Building Water Systems. Managers of nonresidential facilities, like hospitals and hotels, can consult guidelines from ASHRAE for appropriate water temperatures and chemical treatment of water.

Note, no single treatment is guaranteed to permanently eradicate the organism. We strongly recommend that owners ask their health and safety consultant for a comprehensive risk assessment along with the testing and treatment, followed by the development of standard operating protocols and a written maintenance plan.