While a large majority of radioactive material licensing requirements are driven by the federal government’s Nuclear Regulatory Commission, the disposal of naturally occurring radionuclides is not.

Over the past several decades, many state agencies in oil- and gas-producing regions have added NORM-specific regulations to their radiation control programs, and several more are considering similar moves. Now, with the emergence of natural gas shale drilling, states including North Dakota, Ohio, Pennsylvania, South Dakota and West Virginia are introducing regulatory guidelines, causing some confusion in the industry—and underscoring the need for greater understanding about radiation safety and disposal.

State-by-state rulings are, at best, inconsistent when it comes to NORM-specific regulations. This impacts workplace dose rates, concentration limits in soil and water, and waste management. For example, NORM wastes deemed unacceptable for landfill disposal in one state may be sent to neighboring states that permit landfill disposal. The need for radioactive materials licensing, implementation of a radiation safety program, and characterization of NORM constituents may be required in some states, yet ignored in others.

“State-by-state rulings are,
at best, inconsistent when
it comes to NORM-specific regulations.”

Currently, 16 states have regulations covering TENORM and another nine states have regulations and/or guidance addressing NORM. In addition, a number of new statutes are emerging. Last year, the Advisory Council to the North Dakota Department of Health voted unanimously to ratify new rules allowing for the disposal of up to 50 picocuries per gram of TENORM waste from oil and gas production in specially permitted landfills.

Similarly, in response to Marcellus and Utica Shale development, the Pennsylvania Department of Environmental Protection initiated a study to collect information and data needed to effectively manage TENORM from oil and gas operations for environmental and health protection. This study included the assessment of potential radiation exposure, an evaluation of the possible effects of TENORM waste disposal, and the investigation of possible radiological environmental impact. Pennsylvania is also the only state that requires radiation monitors at landfills (alarm at 10 μR/h above background).

Just this year, the West Virginia Department of Environmental Protection published an interpretive amendment to an existing rule that provides direction on radiation monitoring and disposal.

For oil and gas owners and operators, the key point concerning current and emerging regulations is that the requirements for NORM/TENORM disposal can vary considerably across state borders. Organizations must adapt their practices to conform to expectations in the states where they do business.

Also, while NORM is not licensed under federal regulations, it may be regulated by other federal agencies. Here are several examples: the U.S. Environmental Protection Agency sets federal radiation standards for the public and can regulate NORM under the Clean Air Act and the Clean Water Act; the Occupational Safety and Health Administration has authority over hazardous materials in the workplace; and the U.S. Department of Transportation regulates the transportation of hazardous materials, including radioactive materials—which includes NORM.

Oil and gas industry developers and processors may have to address multiple regulatory programs within their health and safety plans—and most of these programs likely need to include a radiation safety expert. 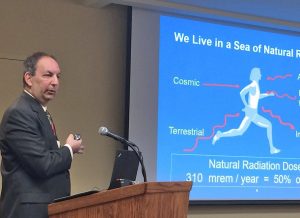 Most oil and gas companies have robust health and safety programs to address occupational hazards. However, many have not incorporated NORM/TENORM-specific radiation safety components. Traversing today’s complex and continually changing regulatory environment with regard to NORM and TENORM can be difficult.

To keep staff up to date on radiation safety responsibilities, NORM/TENORM training courses are regularly available for producers, processors and service companies through the Dade Moeller Training Academy (part of NV5). These training sessions and workshops are designed to ensure that individuals and companies active in the oil and natural gas industries have a full understanding of the permitting and regulatory requirements.

It’s worth noting that not all NORM courses are the same. Review the credentials of the instructors before committing to a course. You will find that all Dade Moeller Training Academy faculty are highly qualified, experienced health physicists with expertise in your specific areas of concern. Having trained radiation safety professionals on your staff who can implement comprehensive radiation safety plans will allow you to develop a quality program and can eliminate the potential for frivolous litigation down the road.

NV5 NORM-TENORM from NV5 on Vimeo.